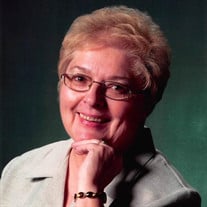 Mary Ann Reinsch (Denholm) went home to be with the Lord on Friday, September 18th, after a brief battle with Covid/pneumonia. And yes, she fought to the end. Mary Ann was born in Akron, Ohio, and grew up in a large Catholic family with two brothers, three sisters, and cousins and family she loved. Like her Polish grandmother, she wanted to feed you if you came for a visit. She loved hosting large holiday dinners with enough food for an army and her fancy china set on the table. You could always find chocolate in candy dishes throughout the house and cookies in the cookie jar. If there was a window, she’d put a plant in it. She never threw anything away. NEVER. Including the contents of the refrigerator. Just ask Charlene about that. She loved her pets, Scrabble, polka music, and Jesus, whom she came to know in the early 1970s. She moved with her family to Durant in 1977, where they lived near Lake Texoma. At various times she worked at the Durant Chamber of Commerce, Bryan County Youth Services, and SOSU. They later moved to Texas, where she worked at Christ For The Nations Institute in Dallas as secretary to the Dean of Men. There she became a mom to many of the Resident Assistants at the men’s dorm. But home was always Durant, where she and Bob retired in the early 1990s. In 1993, Mary Ann co-founded a women’s ministry called Christian Women’s Fellowship of Durant. Today it’s known simply as Remnant, which hosts quarterly retreats. For years she and Bob were Care Pastors at their church, Victory Life. They loved ministering to the singles, and Bob talked everyone’s ears off. She was active in the Bryan County GOP and was a clerk on the Bryan County Republican Board of Elections. Mary Ann loved the Lord and serving others. She was proud of her kids and grandkids. She had many friends, and wherever she went there was laughter. Her favorite Bible verse was Isaiah 40:31—“But those who hope in the Lord will renew their strength. They will soar on wings like eagles; they will run and not grow weary; they will walk and not be faint.” Preceded in Death By: her parents Joseph and Annette Denholm; brother Joe Denholm Jr., husband Robert Reinsch. She is survived by: her brother Anthony Denholm of Cottonwood, AZ, sister Carol Fitzgerald of St. Ann, MO, sister Donna Lillo of Akron, OH, sister Stephanie Howieson of Forest, VA, daughter Valerie Smith of Wylie, TX, daughter Victoria Keffer of Aubrey, TX, daughter Lori Luschei of San Diego, CA, daughter Marilyn MacDonald of Chesapeake, VA, son Frank Reinsch of Durant, OK, son Dale Reinsch of Helena, MT, 18 grandchildren, 24 great-grandchildren. In lieu of flowers, donations can be made to any of Victory Life Church’s ministries. Funeral services will be held at Victory Life Church in Durant, on Wednesday September 23, 2020 at 10:00 AM, burial to follow at Mead Cemetery. Services are under the direction of Brown’s Funeral Service of Durant. Online condolences can be made at www.brownsfuneralservice.com

Mary Ann Reinsch (Denholm) went home to be with the Lord on Friday, September 18th, after a brief battle with Covid/pneumonia. And yes, she fought to the end. Mary Ann was born in Akron, Ohio, and grew up in a large Catholic family with two... View Obituary & Service Information

The family of Mary Ann Reinsch created this Life Tributes page to make it easy to share your memories.

Mary Ann Reinsch (Denholm) went home to be with the Lord on Friday,...

Send flowers to the Reinsch family.