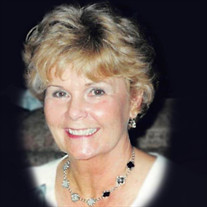 Mary Elizabeth Wagoner Cranford, age 78, passed away peacefully June 3rd, 2020 in Fort Worth, Texas. She was born March 9, 1942 in Durant, Oklahoma to Ray and Grace Wagoner. She quit high school to marry her sweetheart, Jerry Cranford on October 1st, 1958 and later received her GED, a business school degree in accounting and at the age of 50 earned her Bachelor’s Degree in Business Management. In March of 1961, Mary gave birth to what she called her “greatest accomplishment” – her son, Denis Wayne Cranford. From car hop and waitressing, to receptionist, bookkeeper and eventually head of Human Resources for two large companies in Dallas, Mary’s career was always an important part of her life - and during her working tenure served on the Board of the Las Colinas Credit Union. Mary’s philosophy of always giving back was evident in her varied volunteer efforts within her communities. While serving as the Chairman of the Board of Irving CARES, Mary influenced the establishment of a Health Services Building to benefit the entire city. She also served on the Irving Cable and YMCA Board of Directors. And to support the community she grew up in and loved, Mary established a George Washington Grade School reunion to reunite classmates from the East Side of Durant. Mary also served and chaired her Durant High School reunion. She witnessed the need to provide Christmas cheer and love to residents of the local Durant nursing homes and organized yearly trips to sing carols and deliver gifts. She was a passionate collector of Durant memorabilia and donated much of her collection to the Durant Museum. Mary is survived by her husband, Jerry Wayne Cranford, son Denis Wayne Cranford, brother Dale Wagoner, brother Eddie Wagoner and his wife Lynda, and numerous nieces and nephews who love her dearly. She was preceded in death by her parents, Ray and Grace (Grider) Wagoner, and her brothers Harold and David Wagoner. Please join us in celebrating Mary’s life on Tuesday June 9th at 1pm at Brown’s Funeral Home in Durant, Oklahoma. Mary’s favorite color was pink, so please think pink in remembrance. Family hour will be Monday, June 8th from 6pm – 8pm also at Brown’s. Interment at Highland Cemetery following service. https://www.tributeslides.com/tributes/show/R4SFC7MSCJRZ7D9W

The family of Mary Elizabeth (Wagoner) Cranford created this Life Tributes page to make it easy to share your memories.