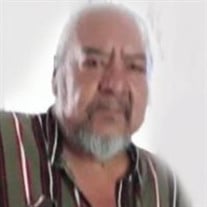 Merle Noah Perkins, age 62, of Durant, passed away in Kingston, Oklahoma on April 10th, 2020. Merle was born to his parents Impson Perkins and Sarah Ann (Pickens) Perkins in Durant, Oklahoma on August 4th, 1957. Merle is a long-term resident of Durant and he was in the construction business. He was always ready to play the guitar and sing or tell jokes to make you laugh. Merle was also a proud member of the Marine Corps. Merle is preceded in death by his mother Sarah Perkins, his step father Silas Perkins, his nephew David Parker, and great nephew Austin Parks. Merle is survived by his sons Eli Moulin and Nathan Parker of Durant, Ok., his niece Demita Hill of Durant, OK., his sisters Helen Parks of Durant, OK., Shelia Hallford and husband Carl of Tishomingo, OK., Barbara Emmonds and husband Jimmy of Durant, OK., his brother Charles Perkins and wife Donna of Kilgore, TX., his grandchildren Jillian Parker and Addison Parker of Durant, OK. Along with many beloved nieces and nephews Graveside services will be at I Hunter Pickens Cemetery in Pickens Oklahoma. A come and go visitation will be Friday April 17th from 5:00 PM to 7:00 PM at Brown’s Funeral Service in Durant. Please be advised the Executive order from Governor Stitt of no more than 10 people for a gathering will be honored. Services directed by Browns Funeral Service, Durant Oklahoma. Online condolences can be made at www.brownsfuneralservice.com

The family of Merle Noah Perkins created this Life Tributes page to make it easy to share your memories.

Merle Noah Perkins, age 62, of Durant, passed away in Kingston,...

Send flowers to the Perkins family.