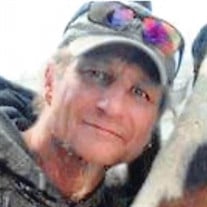 Monte passed from this life on Saturday, October 2nd, 2021 in Caddo, Oklahoma. He was born October 11, 1966 in Amarillo, Texas to Theodore and Sharoyn (Turley) Mitchell. Monte came to Bryan County in 1989 from Southmayd, Texas. He worked... View Obituary & Service Information

The family of Monte Mitchell created this Life Tributes page to make it easy to share your memories.

Send flowers to the Mitchell family.