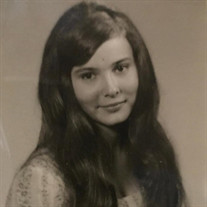 Pam Branam, age 66, of Sherman, Texas passed away on October 25, 2020. Pam was born January 29, 1954 in Ada, Oklahoma to Joseph and Betty Jo Bush. Pam attended Ada Public Schools and after graduation she obtained her bachelors at Southeastern State University and later obtained her Masters. Pam was a teacher and taught Spanish and English as a second language at all levels. Pam married Richard Branam in 1973 and together they raised two children, Dannielle and Jimmy, where they made their home in Coalgate, Oklahoma. Pam was very active in church and loved to embroidery and crochet. She especially loved her dogs. Pam was preceded in death by her parents Joseph and Betty Jo Bush and her sister Carol Bush. Pam is survived by her daughter Dannielle Branam of Durant, OK., her son James Joseph Branam and partner Andrea Dailey of Bonham TX. Grandchildren: Fisher Hutchins of Durant, OK, Mikaela Hutchins of Durant, OK, Jack Hutchins of Durant, OK, Kaitlyn Branam of Durant, OK, Benham Branam of Bells, TX and Easton Branam of Bells, TX A Celebration of Pam’s life is scheduled at First Baptist Church, Calera on Wednesday October 28, 2020 at 11:00 AM. Services are under the direction of Brown’s Funeral Service, Durant. Online condolences can be made at www.brownsfuneralservice.com. https://www.tributeslides.com/tributes/show/BLQT9KBXQG8G3R66

The family of Pam Branam created this Life Tributes page to make it easy to share your memories.

Pam Branam, age 66, of Sherman, Texas passed away on October...

Send flowers to the Branam family.