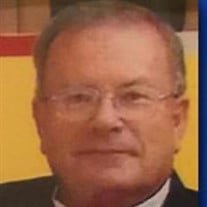 Caddo, OK- Randall Dwane Davis was born Saturday, September 10th, 1949 in Iaeger, West Virginia to parents Gerald Davis and Betty (Osborne) Davis. He passed from this life on February 14th, 2022 in Caddo, Oklahoma at the age of 72. Randall came to Caddo five and a half years ago from Loganville, Georgia. He met Donna Swancy in Doraville, Georgia and later married August 5th, 1972 in Chamblee, Georgia. Randall worked as a diesel mechanic most of his life. He attended several classes and was mostly hands-on learning of his work. He also had his own race car and spent countless hours working on it. Randall served as a part-time youth minister for many years while in Georgia. He was a great influence on many people and touched many lives. He always had a smile on his face and was a blessing to all who knew him. Randall enjoyed hunting, fishing, anything outdoors and being with his grandkids. He spoiled each of them and did whatever they wanted to do. Randall is a member of the First Baptist Church in Caddo. Randall was preceded in death by his parents; his wife, Donna; and sister, Brenda Davis. He is survived by his daughter, Brandi Flippin and her husband, Shane of Caddo, OK; son, Dustin Davis and his wife, Kristy of Hoschton, GA; grandchildren, Michael Davis, Morgan Edwards, Amber Jenkins, Destiny Davis, Matthew Jenkins, Sarah Jenkins, Jacob Jenkins, and JP Flippin; brothers, Kelly Davis and his wife, Cindy; and Chris Davis and his wife, Teresa, all of Georgia; and several nieces and nephews. Memorial services will be held at 2:00 PM on Friday, February 18th, at Brown’s Funeral chapel in Durant with Pastor Allen Crosby officiating. Online condolences may be sent to the family at www.brownsfuneralservice.com. Services are under the direction of Brown’s Funeral Service in Durant. https://www.tributeslides.com/tributes/show/RFP8MFS7XY998XNG

The family of Randall Dwane Davis created this Life Tributes page to make it easy to share your memories.

Send flowers to the Davis family.