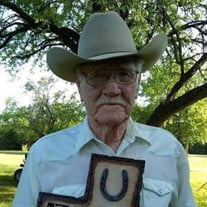 Raymond Elmer Smith was born on September 14, 1939 in LaDonia, TX to Herman LT and Mildred Pauline Norris Smith. Raymond passed from this life on December 27, 2020 at his home at the age of 81. Raymond came to Bryan County in 1941 and married... View Obituary & Service Information

The family of Raymond Elmer Smith created this Life Tributes page to make it easy to share your memories.

Send flowers to the Smith family.