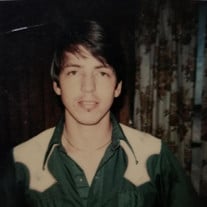 Richard Dewayne St. Clair was born on October 9, 1958 in Hugo, OK to Hansel Ray and Loretta Roxanne (Sellers) St. Clair. Richard passed away on March 7, 2021 in Ada, OK at the age of 62. Richard grew up in Durant and attended Durant Public... View Obituary & Service Information

The family of Richard Dewayne St. Clair created this Life Tributes page to make it easy to share your memories.