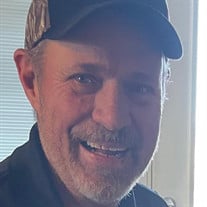 Calera, OK- Ricky Glenn Mattingly, 59, entered into eternal rest on Monday, January 17, 2022 at his home. He was born in Durant Oklahoma on February 20, 1962 to Gene Ray and Christine (Coffman) Mattingly, both of whom welcomed Ricky into Heaven along with his step-mother Joanne Mattingly and brother Bobby Mattingly. He was raised in Achille, Oklahoma, until his family moved to Colbert his junior year, where he attended school and graduated. Ricky married his best friend and the love of his life, Treva Carnes, on May 16, 1987 at their home in Calera and together they raised a beautiful family in a home filled with love and faith. One of Ricky’s greatest achievements was being a dad to Cassi and Rylee, both of whom will always hold dear his timeless wisdom and guidance during their lives. After 20 years of dedicated service to both faculty and staff, Ricky recently retired from Grayson College where his positive impact and heart for service made him an invaluable asset to the campus. Retirement afforded Ricky the chance to enjoy his lifelong hobbies, hunting and fishing along with developing a new hobby, being the best Pawpaw to his cherished grandchildren, Knox, Berkley and Beckham. He loved time outside riding down by the river, checking on cattle and spending time with Treva. A devoted husband, dedicated father, fun loving Pawpaw and friend to so many, Ricky will be greatly missed by all whose lives he touched. He is preceded in death by his parents, step-mother Joanne Mattingly and brother Bobby Mattingly. Ricky leaves his legacy of unconditional love to his beloved wife of 34 wonderful years, Treva Mattingly of Calera; daughter, Cassi Marlow and husband, Blake, of Forney, TX; son, Rylee Mattingly of Norman, OK; grandchildren: Knox, Berkley and Beckham Marlow of Forney, TX; brother, Brian; sister, Debra; aunt, Donna Kay Bowen and husband, Tom, of Calera as well as numerous nieces, nephews, extended family and a host of friends. Condolences may be sent to the family at www.brownsfuneralservice.com. https://www.tributeslides.com/tributes/show/GQSZW3ZFBTC5QSD6

Calera, OK- Ricky Glenn Mattingly, 59, entered into eternal rest on Monday, January 17, 2022 at his home. He was born in Durant Oklahoma on February 20, 1962 to Gene Ray and Christine (Coffman) Mattingly, both of whom welcomed Ricky into Heaven... View Obituary & Service Information

The family of Ricky Mattingly created this Life Tributes page to make it easy to share your memories.

Send flowers to the Mattingly family.