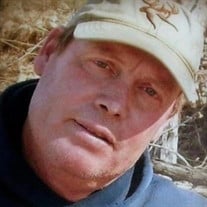 Robert George Bryan Jr. was born July 30th, 1962 in Los Angeles, California and called home to heaven on February 13th, 2021 at the age of 59. He was born to Donna Vorhees and Robert George Bryan, Sr. He was the second oldest of six children. Being the oldest brother, he always felt a responsibility to care for his younger siblings. He was lovingly known as either Bob, Bobby, Dad, Papa or “Crazy Bob”. Bob was a jack of all trades. At a young age he worked cleaning and prepping seafood on the California coast. He was an incredible chef at a country club and in whatever kitchen he just so happened to be blessing with his mad cooking skills. He even opened his own café called Bob’s Place. He worked in construction and was a Local 344 Unionist Plumber and Pipefitter. He worked in port authority on the gulf coast of Mississippi and was also a vibe operator and seismographer for the Lockhart oil company. He played for the Chicago Cubs minor league baseball team and was a volunteer fireman for the town of Carney, Oklahoma during which time he saved many people’s lives. He was also actively involved in the Special Olympics. He was an avid supporter of the local FFA and went to all animal and sporting events; his voice was always heard above the rest. Bob was a happy, fun-loving, simple man who would give you the shirt off his back. He loved and adored his family. He was a devoted father and grandfather. He had a love for all animals, big or small, and came home with an array of them, from baby skunks, raccoons, even a bobcat! He could always be found close to any body of water where he would spend the day fishing. He also enjoyed hunting, cooking, gardening, attending concerts, running up to the gas station for greasy fried food and a soda pop, or just driving the country roads, with the windows down, listening to music. He leaves behind three daughters a son, a ton of awesome grandkids, his siblings, a whole lota of nieces and nephews, and numerous friends. A Celebration of Bob’s life will be held at Brown’s Funeral Service in Durant Oklahoma on Friday, February 26, 2021 at 10:00 AM. Online condolences can be made at www.brownsfuneralservice.com. https://www.tributeslides.com/tributes/show/6HRN8GPRB6HSB73G

Robert George Bryan Jr. was born July 30th, 1962 in Los Angeles, California and called home to heaven on February 13th, 2021 at the age of 59. He was born to Donna Vorhees and Robert George Bryan, Sr. He was the second oldest of six children.... View Obituary & Service Information

The family of Robert George Bryan Jr. created this Life Tributes page to make it easy to share your memories.

Send flowers to the Bryan family.