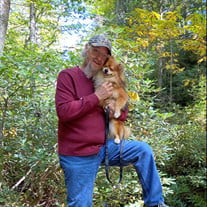 On December 25, 2021, heaven gained a special angel. Robert William Chandler, 70, passed away with his family by his side. He was alert until the end and knew that his battle was finally over. A memorial service will be held at Faith Temple Church in Durant, Oklahoma on Thursday, December 30, 2021 at 5pm. Robert was diagnosed with lymphoma in November 2021 after beating stage 4 throat cancer in 2018. After understanding this unbelievable new diagnosis, he often said “why me?”, but vowed to fight. He always credited his success of defeating throat cancer to his loving wife, Denise and his furry companion, Teddy. Robert’s love and respect for the outdoors began as a young man with the guidance of his grandfather, Lonzo Luton. Robert continued his grandfather’s legacy by sharing his passion of hunting and fishing with his children, grandchildren, and great-grandchildren. After an injury in the oil field, he made the decision to attend the University of Southern Oklahoma in Durant and became the first college graduate in his immediate family, starting a new career in education. Many times, in 2012, after he financed the construction of his dream home, he commented that he hoped his dad was proud of what he had accomplished. His love of the outdoors also included playing golf and working the land that he was so proud of owning. At the time of his death, he was actively employed at Milburn Middle School and was highly respected by his fellow teachers and colleagues within the school. Recently, he received a huge bag of “get well” cards from his students. He reread those cards over and over at home and was humbled by their personal messages of encouragement and love. Robert had the biggest heart for his family, loved to cook breakfast, make salsa, and german chocolate cookies for everyone. His playful side was on full display when he took joy in entertaining his grandchildren and great-grandchildren with his Donald Duck ‘voice’ and at times, cooing to them like a dove. A few years ago, he began a new business, raising Pomeranians and enjoyed caring and spending time with them. Their care gave him purpose. He even took the time to cook them scrambled eggs each morning. After a long day, it was relaxing for him to play catch and love on them. Robert William Chandler is survived by his wife, Denise Chandler; mother, Lonnie Chandler; children, Tina and Richard Roberts, Dwayne and Christi Chandler, Sammy and Susan Chandler, Bryan and Jamie Cormany, Chris and Cathy Wenderski, Missy and John Trader, Angie and Justin Pratt, Anna and Hayden McClour, and his beloved Teddy; grandchildren, Jordan Garnica, Megan Chandler, Austin Chandler, Kerstan Chandler, Creighton Chandler, Braleigh Chandler, Finleigh Chandler, Kelsie Cormany, Buddy Cormany, Addyson Cormany, Derek Wenderski, Redek Wenderski, Alyla Trader, Vyleigh Trader, Lilly Pratt, and Oliver McClour; great grandchildren, Abigail Clark, Wyatt Jones, Tate Chandler, Teagan Chandler, Kolt Woods; Siblings, Kenny and Rhonda Chandler, Sandy and Elvis Knowles, Jerry and Sharon Chandler, and Pam and Mark Schneider; and many more nieces, nephews and cousins who loved and respected him. He was proceeded in death by his maternal grandparents, Lonzo and Mattie Luton and paternal grandparents Rob and Jewel Chandler; father, Bobby Chandler; and great grandchildren, Tripp Chandler and Anberlin Haston. Special thanks to chaplain Dave Barger for his bond with Robert in his final days and weeks. The Guardian Hospice family has been unbelievably and unconditionally supportive of the family. When diagnosed with his 2nd bout of cancer, Robert requested donations to The Lymphoma Research Foundation in his name. Arrangements are under the direction of Brown’s Durant Funeral and Cremation Service.

On December 25, 2021, heaven gained a special angel. Robert William Chandler, 70, passed away with his family by his side. He was alert until the end and knew that his battle was finally over. A memorial service will be held at Faith Temple... View Obituary & Service Information

The family of Robert William Chandler created this Life Tributes page to make it easy to share your memories.

Send flowers to the Chandler family.