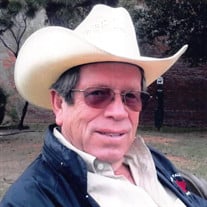 Robert Henry Kirk age 79 of Durant, Oklahoma passed away on Sunday, March 21, 2021 at his home. Robert was born on September 6, 1941 in Sherman, Texas to Paul Henry and Roberta (Neathery) Kirk. Robert married Donna Lynn Ballard on June 15, 1963 in Kingston and they began their family and journey together. They moved to Durant in 1997 and they were blessed with 47 years of marriage until Lynn’s passing on March 2, 2010. Robert was an electrician and owner of RSK Electric until his retirement. He enjoyed fishing, traveling, going on cruises, picking pecans, watching the hummingbirds, working on his ranch and always ready for happy hour. Robert had a deep love for his family and treasured the time he got to spend with them. Robert is predeceased by his wife Donna Lynn Kirk; parents Paul and Roberta Kirk and brother Michael Kirk. Robert is survived by his children Dewanna Kirk-Essler, Sheri Ludwigs, Robert Kirk and their spouses Greg, John and Christy. 2nd love Karen Gardner; sister Paula Addison and her husband Jim; 6 grandchildren Matthew Slovak, Steven Smith (fiancé Alexandra McBryant), Sheridan Smith (fiancé Melissa McAfee), Stephanie Smith, Brynnan Kirk, Angela Principe, Christie Williams, Samantha Williams and Kimberly Essler; great granddaughter Blake Smith and one great grandson on the way and numerous extended family and friends. Graveside services will be held at 11:00 AM Saturday, March 27, 2021 at Woodberry Forrest Cemetery in Madill, Oklahoma. Renford Norris will officiate. Pallbearers will be Greg Essler, John Ludwigs, Matthew Slovak, Steven Smith, Roy Kimberlin and Robert Kirk. Honorary pallbearer will be Jimmy Lemmons. The family will receive friends at the Funeral Home on Friday, March 26, 2021 from 5-7 PM. Condolences may be sent to the family at www.brownfuneralservice.com. Arrangements are under the direction of Brown’s Durant Funeral and Cremation Service. https://www.tributeslides.com/tributes/show/99LWG3PT44KW7TF4

The family of Robert Henry Kirk created this Life Tributes page to make it easy to share your memories.

Send flowers to the Kirk family.