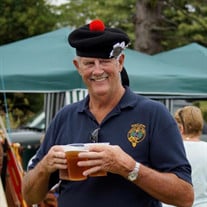 Roddie “Rod” Melton McLaren Jr. passed away with his family by his side on February 27, 2022, at the age of 74. Rod was born on April 17, 1947, in Durant, Oklahoma to the late Roddie Melton and Bertie Mae (Cravey) McLaren Sr. Rod attended Southeast High School in Oklahoma City. He dropped out to join the United States Marine Corp. He proudly served his country that he deeply loved, from 1967-1968 during the Vietnam Conflict as a Corporal in Alpha Co. 1st Battalion 1st Marine. He fought in Con Thien twice, Hue City during tet of 68 and Ke Sahan. He earned his GED while in the Marine Corp and after his Honorable Discharge he graduated from Rose State College and Central State College with his bachelor’s degree in accounting. He married his high school sweetheart Sherry Lee Manney on March 30, 1979, in Oklahoma City and they were blessed with two daughters, Crystal and Monica. He owned and operated the McLaren Agency as an insurance agent for many years and received several awards for selling insurance and was a real estate broker, owned rent houses and operated McLaren Family Farms as a cattle rancher. He was a member of St. John Episcopal Church, a 32nd degree Mason as was his father, I.O.O.F. and was a member of the National Wild Turkey Federation. He enjoyed traveling, hunting, and fishing, going to the lake and boating. Rod was an amazing cook, a scotch connoisseur, and a member of the Clan MacLaren. Rod is preceded in death by his parents; sisters Betty Bradley and Ruth Ellen Rude; uncle “Slick” Daniel; aunt Natalie Daniel; cousin Harold Daniel and best friends Fred Garrison and Mel Cook. Loved ones left to continue his amazing legacy are his wife of 43 years Sherry McLaren of the home; daughters Crystal Lee McLaren and husband Dan Bonnell of Cosmopolis, WA and Buena Vista, Mexico and Dr. Monica Mae Woodall and husband Lee of Calera, OK; granddaughter Meagan Kovash and husband Duncan and their children Presley, Parker and Gabriel of Calera, OK; granddaughter Michaela Hise and husband Cameron of Wheeling, IL; beloved dog Motley and cats Sunshine and Sealee; brother in law Weldon Manney and partner Glenda Majors of Colorado; cousin Curtis Daniel and wife Juanita of Durant; numerous nieces, nephews and many dear friends. Services to celebrate Rod’s life will be held at 11:00 AM Saturday, March 5. 2022 at Brown’s Funeral Service Chapel. Rev. James Blagg and Rev Jacob Toews will officiate. The family will receive friends at the Funeral Home on Friday evening from 6-8 PM. Honorary pallbearers will be Lee Woodall, Trey Daniel, Joe Bradley, Joseph Al-Khateib, Ricky McCarty, Dan Bonnell, Danny Manney, Jeremy Manney and Frank Hayes. In lieu of flowers, the family requests memorials be made in Rod’s name to the Masons or St. John Episcopal Church. Condolences may be sent to the family at www.brownsfuneralservice.com. Arrangements are under the direction of Brown’s Durant Funeral and Cremation Service. https://www.tributeslides.com/tributes/show/669CFN9JT762ZSLZ

The family of Roddie "Rod" Melton McLaren Jr. created this Life Tributes page to make it easy to share your memories.

Roddie “Rod” Melton McLaren Jr. passed away with his family by...

Send flowers to the McLaren family.