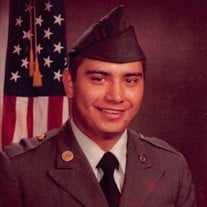 Calera, OK- Roger Alan Aplin was born Tuesday, October 9, 1962 in Durant, Oklahoma to Frankie Melburn Aplin and Mildred June (White) Aplin. He passed from this life unexpectedly on Thursday, January 6th, 2022 at his residence at the age of 59. Roger grew up and attended school in Durant. Roger is a retired National Guardsman having served twenty plus years. He was very proud of his service and always respected the military and our nation’s flag. Roger had worked several jobs during his life; working as a diesel mechanic for NTEC Construction Equipment in Denison, Texas for fifteen years. He worked on bulldozers and other heavy equipment. He also owned his own truck for a few years before he began working for Esbenshade Incorporated in Achille, Oklahoma as a sod farm truck driver. Roger is a proud member of the Choctaw Nation. Roger enjoyed fishing, hunting and playing dominoes. He especially loved spending time with his two grandsons, they were his pride and joy. Roger was preceded in death by his parents; and a special friend, Cindy Teague. He is survived by his daughters, Traciey R. Aplin, with her son, Lincoln A. Aplin, of Durant, OK, and Rebecka A. Bradley and her husband, Matthew, with their son, Zath D. Aplin, of Pryor, OK; his siblings, Curtis Brown and wife, Kathy, of Kansas City, MO, Marianne Brown of Tulsa, OK, Sherry Damp’f of Tulsa, OK, Phillip Aplin and wife, Berniece, of Durant, OK, Harold Aplin and wife, Michele, of Calera, OK, Robert Aplin and wife, Cleta, of Denton, TX, and Frank Douglas Aplin of Calera, OK; numerous nieces, nephews, great nieces and nephews, and other extended family members. Funeral services to celebrate Roger’s life will be held at 1:00 PM on Wednesday, Jan. 12th, at Brown’s Funeral Home chapel with Bro. Tommy Green officiating. Full military honors will be rendered by the National Guard. Online condolences may be sent to the family at www.brownsfuneralservice.com. Services are under the direction of Brown’s Funeral Service, Durant. https://www.tributeslides.com/tributes/show/LCQFQNK9X9J8H4BD

Calera, OK- Roger Alan Aplin was born Tuesday, October 9, 1962 in Durant, Oklahoma to Frankie Melburn Aplin and Mildred June (White) Aplin. He passed from this life unexpectedly on Thursday, January 6th, 2022 at his residence at the age of... View Obituary & Service Information

The family of Roger Alan Aplin created this Life Tributes page to make it easy to share your memories.

Send flowers to the Aplin family.