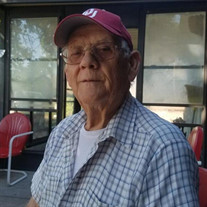 Ron Briedwell left this world to be with the Lord and the love of his life Lawana Monday February 15th, 2021. Ron was born September 21st, 1939 in Durant Oklahoma to Bert and Lahoma Briedwell. Ron was a man who loved the Lord, His late wife, His children, grands, and great grands very much. They all held an incredibly special place in his heart. Ron was a quite caring man that could be funny at times pulling pranks on his friends. Saying things totally catching one off guard and then belly laughing because of the look on their face. He was adored by all who knew him. Stated by many “He was one of my most favorite people.” Ron attended School in Azle Texas where he was quite the athlete running track and playing football. At the age of 17 Ron joined the Army; it is there he finished school gaining his diploma. He was married shortly after to his first wife Marion whom they shared 2 sons, Ronnie Jr., and Stoney. Later, He met the love of his life Lawana only dating a few months before marrying in April 1972. Together adding their 2 daughters Misty and Christi to their family Sharing 48 years together. At an early age Ron became an ordained Minister, spending a lot of his time in Mexico as a Missionary. Ron was a gifted carpenter who worked on many jobs building bridges across the US. In his later years he worked for Benham and Holloway as a power Dam engineer and inspector retiring to his hometown Durant. Ron had a passion for writing and published several poems, winning an award for his work. Ron had a big heart. His love for animals was undeniable as he was notorious for bringing them home to care for when no one else would. At one time Ron and Lawana cared for 26 dogs and 2 cats. Ron leaves behind 2 sons, Ronnie Briedwell and Stoney Briedwell of Durant,2 Daughters Misty Dickey and husband David of Mineral Wells Texas, Christi Watkins, and husband Alan of Durant. 12 grandchildren, and 13 great grandchildren. Siblings, and a plethora of friends. Ron is proceeded in Death by his wife Lawana Briedwell, his parents Bert and Lahoma Briedwell, and Brother William Briedwell. ser Services are pending, and under the direction of Brown's Funeral Service Durant. Online condolences can be made at www.brownsfuneralservice.com https://www.tributeslides.com/tributes/show/G6MP32KRNJ4NYXMQ

Ron Briedwell left this world to be with the Lord and the love of his life Lawana Monday February 15th, 2021. Ron was born September 21st, 1939 in Durant Oklahoma to Bert and Lahoma Briedwell. Ron was a man who loved the Lord, His late wife,... View Obituary & Service Information

The family of Ron Briedwell created this Life Tributes page to make it easy to share your memories.

Ron Briedwell left this world to be with the Lord and the love...

Send flowers to the Briedwell family.