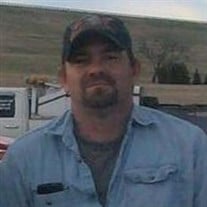 On February 4, 2021 Ronnie Leigh Moore Jr. of Mead, OK succumbed to the injuries he sustained from a motorcycle accident. Ronnie was born on September 15, 1971 in Houston, TX to Ronnie Leigh and Annie Laura (Pickering) Moore Sr. He spent many summers in southern Mississippi where he learned to hunt and fish. Most of his young adulthood was spent in Pasadena where he played football in both Jr. High and High School. Ronnie married the love of his life Deborah Jean Rhea on March 16, 2010 in Pensacola, FL and they began their journey together. Ronnie attended welding class at Kiamichi Technical Center in Durant in 2016 where he was awarded best student for both fall and spring semesters. Ronnie started working at Mid America Steel and Wire on July 16, 2018. He enjoyed his job and his coworkers. When he was not at work, he enjoyed having people over for a cookout or having a big family get together. He always believed he was the life of the party. Ronnie is preceded in death by his parents Ronnie Leigh Moore Sr. and Annie Laura (Pickering) Culepepper and sister Kimberly Ann Moore. Ronnie is survived by his loving and devoted wife Deborah Jean Moore of Mead, OK; children Ronnie Moore and wife Joanie, Stephanie Swan, Destinee Zech, Kimberly Usrey, Heather Sherman and husband Dakota and Kalya Green; siblings Shiela Moore Utley and husband Jim, Raivyn Moore Gorden and husband Benjamin, Amy Rosas and Michael Lewis; grandchildren RyanAlan Swan, Lenea Swan, Stormy Sherman, Daniel Moore, Harley Sherman, Adeline Swan, Avalon George and Andrew Moore; many aunts, uncles, nieces, nephews and extended family and friends. Funeral services to celebrate Ronnie’s life will be held at 3:00 PM Saturday, February 13, 2021 at Brown’s Funeral Service in Durant, OK. The family will receive friends from 1-3 PM prior to the service. Ronnie will be cremated and then laid to rest with his wife, Deborah upon her death. Condolences may be sent to the family at www.brownsfuneralservice.com. Arrangements are under the direction of Brown’s Durant Funeral and Cremation Service. https://www.tributeslides.com/tributes/show/9WGTDD89J3X47WD5

On February 4, 2021 Ronnie Leigh Moore Jr. of Mead, OK succumbed to the injuries he sustained from a motorcycle accident. Ronnie was born on September 15, 1971 in Houston, TX to Ronnie Leigh and Annie Laura (Pickering) Moore Sr. He spent many... View Obituary & Service Information

The family of Ronnie Leigh Moore Jr. created this Life Tributes page to make it easy to share your memories.

Send flowers to the Moore family.