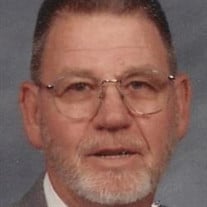 On September 25, 2021, William Ross Davis of Durant, Oklahoma passed away at the age of 81years 8 months and 7 days. William Ross Davis was born in Yarnaby, Oklahoma to James Madison Davis and Lela Vines Wesberry Davis, on January 18, 1940. He married Melva Hammons Timberlake in 1964 who passed away in 1999. He then married Karolyn Reese Huggins in 2000. Ross graduated from Calera High School in 1958 and earned a Bachelor of Science and Masters of Education from Southeastern Oklahoma State University. He served three and one half years in the US Air Force and spent most of his enlistment in England. He was a trained Fuel Specialist and his athletic ability allowed him to play basketball, baseball and softball. He flew over much of Europe playing Basketball. He was a high scorer and earned All UK Basketball honors. Ross received many athletic awards as a player and a coach. As a player he was a member of the Calera 1956 Oklahoma State Basketball Champion Team. Ross was a Calera High School All-Star. He received the prestigious Jim Spivey Award in 1957. He was recruited by no less than five universities to play basketball. As a military player he received All United Kingdom honors in Basketball, baseball and Softball 1961-64. He also played softball for many years and was an outstanding pitcher and named the Oklahoma Softball player of the year in 1978. As a High School Coach Ross was very successful with 421 wins to his credit. He won many coaching honors. He took five teams to the State Tournament. His first team he took to the state tournament was Waurika in 1981. His team made it to the semifinals. His 1983 team at Velma Alma High School made it to the finals losing by one point in overtime. He had the privilege of coaching his son Jimmy all four years of HS, who was selected as the small school player of the year 1984. His team at Velma Alma won State in 1984. Ross’ Calera High School team made it to the State Tournament Quarter finals in 1994 and the semifinals in 1995. Ross was twice selected Regional Coach of the Year. He was selected five times by the Duncan Banner Newspaper as Coach of the Year. He was twice selected as Coach of the Year by the Denison Herald Newspaper. He had three players selected as Players of the Year for the State of Oklahoma. He had four players selected for the Oklahoma All-State squad Russ Harrison, Jay Mauck, Jimmy Davis and Kevin Rehl. He had two players selected as All-American, Kevin Rehl and Jay Mauck. He was inducted into the Bryan County Athletic Hall of Fame. He was inducted into the distinguished Oklahoma Coaching Association (OCA) Hall of Fame in 2017. He was selected to Coach of the Faith 7 basketball team two years and also coached the All-State team. Mr. Davis was preceded in death by both parents, son Richard Lynn Timberlake, and siblings, Joseph Davis, James W. Davis, Homer Davis, C.B. Davis, Hazel Manners, Ina Fonville, Evelyn Davis, Helen Watt, Delmas Wesberry, Willard Wesberry, Wyoma Wesberry Dollar, John Wesberry, Frank Wesberry, Dorothy Wesberry Prise, Lolita Wesberry Johnson, Tommy Wesberry, Ruth Wesberry Jobe, James Wesberry, Guy Davis, and Dillard Davis. Ross is survived by his wife Karolyn, of the home in Durant, Oklahoma, brothers Lewis Wesberry, Hendrix, Oklahoma, Roy Davis Durant, Oklahoma, sister Mary Burcham, Gordonville, Texas, daughter Tonya Bagwell of Archer City, Texas, daughter Melanie Renteria and son Dr. Jim Davis of Oklahoma City and, stepsons Chad Huggins of Plano, Texas and Jonathan Huggins, Pratt, Kansas. Grandchildren, Dr. Mason Davis, Brady Davis, Candis McLoud, Patrick, Catherine and Michael Renteria. Shaun Timberlake, Ashley Bint, Brook Hampton, Gabrielle and Zoe Huggins. Eleven great grandchildren and many friends and relatives. Mr. Davis was a member of the Kemp Baptist Church and is in Heaven with his Lord and Savior. He took great pride in helping guide his Children and Grandchildren. Services will be held at the Bok Laughlin Gymnasium Calera High, Saturday October 2, 2021 at 10:00 am. Rev. Roger Speers and Rev Jim Parish will officiate the service. Pallbearers are: Yancy Bishop, Wade Baskin, Billy Mac Wright, Bryan Quick, Jay Mauck and Kevin Robinson. A special thanks to Dr. Kevin Gordon and staff of the Durant Alliance Hospital and the Kings Daughters and Sons Nursing Home.

The family of Ross Davis created this Life Tributes page to make it easy to share your memories.

Send flowers to the Davis family.