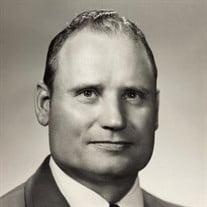 Royce W. Jones, loving husband, father, grandfather, and great-grandfather, died on September 10th in Mercy Hospice, Oklahoma City. He was 92. Royce was born on Sept. 3, 1929, to Samuel Jackson Jones and Lillie Pearl Parkhill Jones, in Powell, Oklahoma. The eighth of 10 siblings, Royce graduated from Kingston High School in 1948 and went on to Murray State College for two years, transferring to Oklahoma A&M College (now Oklahoma State University) where he graduated with a degree in Agronomy in 1952. He was drafted into the Army during the height of the Korean War and was lucky enough to be sent to Germany where he served 18 months as a Radio Operator, reaching the rank of Corporal. After leaving Active Service, Royce spent 35 years in the National Guard and Army Reserves, achieving the rank of Colonel before retiring in 1989. Royce spent his career in public service, working for the U.S. Department of Agriculture. Throughout his 32 years of government work, he and his family lived in several towns in New Mexico and spent six years in the nation's Capital before returning to Oklahoma. In retirement, Royce and LaRue, his wife of 68 years, loved to travel and spend winters in Rockport, Texas. His hobbies included spoiling his grandchildren rotten, golfing, fishing, and restoring and refinishing old furniture. Royce was preceded in death by his parents, Sam and Lillie Jones, and seven siblings, Owen, Vinita, Marie, Irene, Louise, Loyd, and Overton. Royce is survived by his wife, LaRue Jones; one son, Rick Jones and wife Luz; one daughter, Dianne Redden and husband Jerry; six grandchildren (Melissa, Crystal, Justin, Jennifer, Ashley, and Jessica); eight great-grandchildren (Chloe, Addison, Andrew, Chase, Cara, Bennett, Cooper, and Lily Pearl); many nieces and nephews; and two sisters, Margie Askew and Patricia Smith. https://www.tributeslides.com/tributes/show/NWMF3ZNJZZ3Q6SHQ

The family of Royce Walton Jones created this Life Tributes page to make it easy to share your memories.

Send flowers to the Jones family.