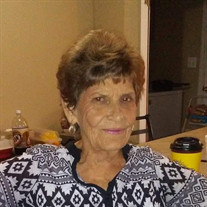 2 Timothy 4: 7-8 I have fought the good fight, I have finished the race, I have kept the faith, now there in in store for me the crown of righteousness, which the Lord, the righteous judge will award to me, on that day but not only to me, but also to all who have longed for his appearing. Just think of the glory and honor that Ruby Jean Noltkamper will receive now that she is with the Lord, and that she is home with her husband where she longed to be. Ruby Jean (Dooley) Noltkamper was born Monday, April 10, 1944 to Tim and Delsie (Bennett) Dooley. She passed away Saturday, November 27, 2021 in Durant, Oklahoma at the age of 77. Jean was what everyone called her, and was also a wife, mother, meme, grandma, sister, aunt and friend to so many who loved her. She was preceded in death by her husband for fifty years, David Arthur Noltkamper; her parents, Tim and Delsie Dooley; 5 sisters, Patty Dooley, Linda Thomas, Jenell Crews Doley, Lesa Dooley King, and Joanna Dooley Sipes; and many other family members. Jean is survived by children, Brenda Nutall Noltkamper, Sandra Lynn Noltkamper and Daniel Blane Noltkamper and his wife, Jodi; 9 grandchildren and 20 great-grandkids; brother, Charles Dooley and his wife, Mary, sister, Ronda Bauck and her husband, Warren, sister, Wonell Gatlin and her husband, Cloyce, sister, Tammy Olendorf and her husband, Terry, sister Tonya Ingram and her husband, Roy, and brother, Richard Dooley and his wife, Michelle. Jean lived in Durant most of her life. She married Dave Noltkamper on February 8th, 1965. They lived in St. Louis, Missouri for several years. Then they moved to Durant to be closer to her mother. After the passing of her father in 1976, she has lived here since. She has so many people who love her and are going to miss her. She was the backbone of her family and she would do anything for the people she loved. She had a heart of gold. She loved her grandkids and great grandkids with true pure love each of them brought her so much joy and love right back. She often said when her kids were born, all of them hold a special spot in her heart and always will. Jean then said when her grandkids were born, her heart was just overflowing with love. She knew then why there was grand in grandmother. She was loved by so many people and will be missed. https://www.tributeslides.com/tributes/show/CSS4HPGXRWJD332N

2 Timothy 4: 7-8 I have fought the good fight, I have finished the race, I have kept the faith, now there in in store for me the crown of righteousness, which the Lord, the righteous judge will award to me, on that day but not only to me,... View Obituary & Service Information

The family of Ruby Jean (Dooley) Noltkamper created this Life Tributes page to make it easy to share your memories.

Send flowers to the Noltkamper family.