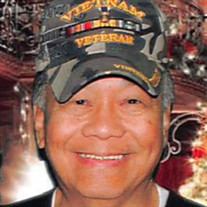 Rudy Estomago Ababon, 73, of Kingston, Oklahoma, passed away peacefully in McKinney, Texas, on March 3, 2021. His wife Lorene Ababon was by his side. Born on March 20, 1947, to Pedro Ababon and Hendrica Estomago, Rudy was the eldest of nine siblings in Honolulu, Hawaii. He was a member of the ROTC at McKinley High School and later joined the army at the age of 19. Rudy was sent overseas to serve in Vietnam where he meets his first wife, Lien. They married and had 4 children together in Vietnam: James, Dianna, Christine, and Cynthia. They left Vietnam on December 23, 1974, and returned to Honolulu, Hawaii. Rudy went on to work overseas in Saudi Arabia for 10 years for the Fluor Corporation. He later returned to the states and settled in California in 1984 with his family. Rudy had an extensive career in Human Resources Management that spanned 50 years and worked for prominent companies such as Vinnell Corp, Fluor Corp., Perrier, Ricoh Electronics, and Discus Dental. He spent his last employed years doing HR consulting for various organizations. Later in life Rudy found his true love Lorene and they were married on March 30, 2010, at New Beginnings in Oklahoma where they had moved to in 2010 to start their life. They settled down on a little land in Kingston Oklahoma. Rudy enjoyed his time most when working on his 1985 Mercedes. Rudy and Lorene became members of the First Baptist Church. Rudy is survived by his wife, Lorene Ababon, siblings Lawrence, Conrad, Vincent, and Donna, children James Ababon, Dianna Ababon, Christine Ababon, and Cynthia Moses, granddaughters, Makena and Cameron. Services will be held graveside at Powell Cemetery in Lebanon, Oklahoma at 2 pm on March 8, 2021. Services are under the direction of Brown's Funeral Service of Madill. Online condolences can be made at www.brownsfuneralservice.com https://www.tributeslides.com/tributes/show/ZNYXX8DCYMZ548NR

Rudy Estomago Ababon, 73, of Kingston, Oklahoma, passed away peacefully in McKinney, Texas, on March 3, 2021. His wife Lorene Ababon was by his side. Born on March 20, 1947, to Pedro Ababon and Hendrica Estomago, Rudy was the eldest of nine... View Obituary & Service Information

The family of Rudy Estomago Ababon created this Life Tributes page to make it easy to share your memories.

Send flowers to the Ababon family.