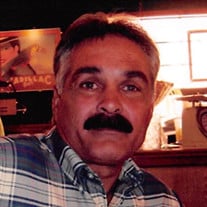 Not sure what to send?

Bokchito, OK- Clyde Steven Jessie was born Friday, September 12th, 1958 in Idabel, Oklahoma to Raymond and Kathryn (Campbell) Jessie. He passed away on Wednesday, January 12th, 2022, at the age of 63. Steve grew up in Houston, Texas, where he met his wife, Gina Strickland, and had one daughter, Heather Nichole Jessie. He went on to attend college at Southeastern Oklahoma State University. From there, Steve went into construction, worked on Oil rigs, was an Iron worker who built many skyscrapers, and was a crane operator in Brazil, Montana, and Texas. Steve was also a welder, and built homes and churches, alongside his brother and father. He enjoyed his last years in Oklahoma on his farm he called God’s Country. He loved to hunt, fish, and serve others. He loved his family and friends and enjoyed spending time with them and making memories. Steve was preceded in death by his father, Raymond Jessie of Bokchito, Oklahoma; a brother, Mike Jessie of Houston, Texas; grandparents, Leonard and Ruth Campbell of Bokchito, Oklahoma, and Jack and Elizabeth Jessie, of Broken Bow, Oklahoma. He is survived by his mother and step-father, Kathryn and Jon Mixer of Guthrie, Oklahoma; his daughter and son-in-law, Heather and Remy Hamilton of Allen, Texas; his 3 grandchildren, Tate, Elle and Hawk Hamilton of Allen, Texas; his sister and brother- in-law, Kim and Keith Colligan, of Durant, Oklahoma, and his niece, Kristy Colligan, of Orlando, Florida. Funeral services will be held at 2:00 PM on Tuesday, Jan. 18th, 2022 at Brown’s Funeral Home chapel with Pastor Ryan Perry officiating. Interment will follow at Bokchito Cemetery with Tate Hamilton, Reggie Sullivan, Randy Sullivan, John Bowling, Ronnie Jessie, Jimmy Dill, Bryne Rich and Farin Dill serving as casket bearers. Honorary casket bearers will be Terry Condor, James Putman, Jeff Hamill and Remy Hamilton. The family will receive friends on Monday, Jan. 17th, 2022 from 6-8 PM at Brown’s Funeral Home in Durant. Online condolences may be sent to the family at www.brownsfuneralservice.com. Services are under the direction of Brown’s Funeral Service, Durant.

Bokchito, OK- Clyde Steven Jessie was born Friday, September 12th, 1958 in Idabel, Oklahoma to Raymond and Kathryn (Campbell) Jessie. He passed away on Wednesday, January 12th, 2022, at the age of 63. Steve grew up in Houston, Texas, where... View Obituary & Service Information

The family of Steve Jessie created this Life Tributes page to make it easy to share your memories.