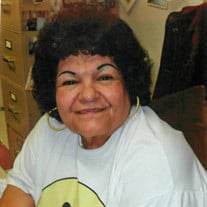 Theresa was born in Bridgeport, Nebraska to Manuel and Connie (Alvarez) Caldera and went into the presence of her Lord and Savior Jesus Christ on Thursday, September 2, 2021. Theresa was raised and attended elementary schools in Bayard, Nebraska as well as Scottsbluff High School in Scottsbluff, Nebraska. Theresa married her sweetheart, Zefe Laborico, on May 20, 1978 in Bayard, Nebraska and have been blessed with over 43 years of marriage. Theresa and Zefe came to Durant in May of 1980 from Nebraska. Theresa was employed with People First Industries, formerly known as Sheltered Work Opportunities, in Durant for 33 years and held the position of Case Manager/Program Director. She was very instrumental in the success of helping people with obtaining employment. Theresa was a Christian and she and Zefe are faithful members of Victory Life in Durant. Theresa loved her family and spending time with them, especially her numerous grandkids. She also enjoyed traveling. Theresa was preceded in death by her parents, an infant son, Paul Anthony, and son, George Albert. She is survived by her loving husband, Zefe, of Durant; sons, Manuel Hernandez of Scottsbluff, NE, Juan Hernandez of Denison, TX, Zefe Laborico III and his wife, Charlee, of Durant, Robby Laborico and his wife, Ashley, of Durant, Gunner Laborico of Durant, and Caleb Hernandez and his wife, Amity, of Durant; a ‘bonus’ son, Brandon Johnson and his wife, Tammy, of Durant; her brother, Ruben Caldera of St. Louis, MO; longtime dear friends, Lloyd and Liz Lee, and Frank and Lupita Luna; and many, many grandchildren, numerous great-grandchildren, and good friends. Services to celebrate Theresa’s life will be held at 11:00 AM on Wednesday, Sept. 8, at Victory Life Church in Durant with Pastor Jacob Sheriff officiating. Committal services will follow at Highland Cemetery with Justin Brown, Logan Thompson, Josh Nix, Tim Lee, Randy Stewart and Josh Garrett, serving as casket bearers. The family will receive friends on Tuesday, Sept. 7, from 6:30 – 7:30 PM at Brown’s Funeral Home. Online condolences may be sent to the family at [email protected] https://www.tributeslides.com/tributes/show/JN46NGMTWBGQJHTK

Theresa was born in Bridgeport, Nebraska to Manuel and Connie (Alvarez) Caldera and went into the presence of her Lord and Savior Jesus Christ on Thursday, September 2, 2021. Theresa was raised and attended elementary schools in Bayard, Nebraska... View Obituary & Service Information

The family of Theresa Laborico created this Life Tributes page to make it easy to share your memories.

Theresa was born in Bridgeport, Nebraska to Manuel and Connie...

Send flowers to the Laborico family.