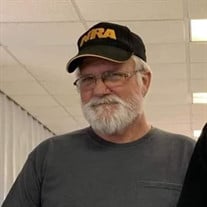 Troy Gene Glover was born on January 18, 1952, in Durant, OK to Jack O’Neal and Dorothy (Sutterfield) Glover. Troy passed away on February 26, 2022, in Durant at the age of 70. He married his wife Diane on December 26, 1978, and he worked as a welder and maintenance supervisor. He was of the Baptist Faith, and he enjoyed gardening, fishing, and hunting. Troy proudly served his county in the United States Army for 4 years until his Honorable Discharge. Troy was preceded in death by his parents and daughter Deyonna Arnold. Troy is survived by his children Tracy Glover and wife Rhonda, Neal and Sharmaine Glover, Allen Bailey and wife Lisa and Joey Bailey and wife Chanelle; siblings Wayne Glover and wife Susan, Gordon Glover and wife Doris, Delbert Glover, Audrey Mullens, Theresa Oden and husband Jack and Donna Noel; 27 grandchildren; 18 great grandchildren and numerous extended family and friends. Funeral services will be held at 2:00 PM Thursday, March 3, 2022, at Brown’s Funeral Service Chapel. Interment will follow in Highland Cemetery with Tracy Glover, Neal Glover, Allen Bailey, Joey Bailey, Aaron Arnold, and Corey Bailey serving as pallbearers. Honorary pallbearers will be Corey Scott Fowlkes, Brian Fowlkes, Tim Ussery and Joe Nunez. The family will receive friends at the Funeral Home on Wednesday evening from 6-8 PM. Condolences may be sent to the family at www.brownsfuneralservice.com. Arrangements are under the direction of Brown’s Durant Funeral and Cremation Service. https://www.tributeslides.com/tributes/show/LJ2TGB7736RJSRSH

The family of Troy Gene Glover created this Life Tributes page to make it easy to share your memories.

Send flowers to the Glover family.