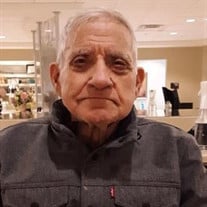 Troy, or Gene as he was known by his family and friends, was born in 1935 to Jesse A Jones, Sr. and Rudelle Jones in Mead, Oklahoma. He was the second of five boys who were raised on various farms and dairies around Durant, Oklahoma. Troy proudly served his country as a soldier in the United States Army from 1956 to 1958. He was TASKER to return home from South Korea, where he was stationed, to help run the farm after his father suffered a severe back injury. He then moved to Amarillo, Texas in 1959 and began working for Mason and Hanger, a Department of Energy contractor, at Pantex plant. Troy left his position to return to Durant for graduate work. It was during this time that he met his future wife, Wanda Faye Tuttle. They met in January of 1963 and married on August 31st of that year. Gene and Wanda made their home in Amarillo while returning to work at Pantex. They officially returned to Durant to live out their retirement in 2013. Troy had a passion for education and learning. He was an avid reader of history and current events on the local, national, and world levels. He possessed an uncommon aptitude for financial news and the inner workings of the New York Stock Exchange. His love of learning led him to earn a bachelor’s degree in Education in 1959. He continued his formal education pursuits by earning three master’s degrees: Education in 1968, Economics in 1974, and United States History in 1995. Troy worked for over forty years at Pantex. He served twenty-five years in the Security Division Force Organization. He began his career as Security Police Officer. He was promoted to supervisor and then served as an administrative lieutenant and part-time training officer. Troy was promoted to Captain in 1974. Two years later, he was promoted to Chief of Physical Security. Troy continued his career at Pantex serving in various positions working with budgets, vulnerability assessments, and strategic planning. He was a liaison to several other facilities, including Lawrence Livermore National Laboratory at the University of California at Berkley; the Rocky Flats plant in Denver, Colorado; Los Alamos National Laboratory, in New Mexico; Nevada Test Site; Savanah River site located in South Carolina on the Savanah River; and Oak Ridge National Laboratory in Oak Ridge, Tennessee. He retired in 2004. Additionally, Troy taught business, economics, and American History for Wayland Baptist University from 1981 to 1985. Taught American history for Amarillo College from 1991 and 1992, and then for Wayland Baptist again from 1997 to 1999. He was a member of First Baptist Church of Amarillo, Texas where he served as a deacon. Troy and Wanda taught bible study to the young adult singles for over twenty years. Troy was also a Master Mason. Troy was proceeded in death by his parents and his wife, Wanda. Troy is survived by his sons Mark Jones (Wife Kristi) of Allen, TX. David Jones (wife Shelly) of Melissa, TX. Grandson Christopher Jones of Garland, TX. Granddaughters Ellie Jones and Charlee Jones of Melissa, TX. Also, his four brothers, James Jones of Virginia, Jesse (Buster) A. Jones, Jr. of Durant, OK, Quinton Jones of Calera, OK, and Larry Jones of NC.

Troy, or Gene as he was known by his family and friends, was born in 1935 to Jesse A Jones, Sr. and Rudelle Jones in Mead, Oklahoma. He was the second of five boys who were raised on various farms and dairies around Durant, Oklahoma. Troy... View Obituary & Service Information

The family of Troy E. Jones created this Life Tributes page to make it easy to share your memories.

Troy, or Gene as he was known by his family and friends, was...

Send flowers to the Jones family.