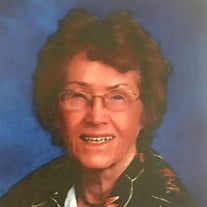 Verda Volk, age 96 entered into eternal rest on October 8, 2020. Verda was given life by God, The Creator of all things, and was born March 10, 1924, in Lamesa, TX, a daughter of Henry Larkin Bruce and Alta Mae Stricklen. Verda graduated from Albany High School in Albany, OK on May13, 1938 On August 4, 1944, at Galveston Lutheran Church she received the gift of beloved companion in her husband, Ardo Rochow Volk. He preceded her in death on September 15, 2000. Verda worked as a waitress at the Denison Hotel in Durant, Ok, and as the head librarian in Hynnis, NE, and later received her beautician license and went into business at St. Anthony’s Hospital, Rock Island, IL. Her main career was Homemaker. Verda was an active member and held offices in the Silver Cross Circle of the Kings Daughters. She was a member of the Gatlinburg Duplicate Bridge Club, Gatlinburg, TN. She belonged to two recreational bridge clubs in the Quad Cities. She was a member of a quilt sewing group at Parkview Lutheran Church. She never failed to have a garden. Verda was preceded in death by three brothers: Franklin Bruce, Robert Bruce, A.V. Bruce. Two sisters: Helen LeFeaver and Vera Clemens. She is survived by her sister Evelyn Smith of Durant, OK, her son Charles Henry Volk II and wife Andrea of Long Grove, IA; two grandchildren Irina Christine Volk of Camp Pendleton, CA, and William Alexander Volk at Incirlik Air Force Base, Turkey. Great grandchild, Hazel Lynn Wolf. Funeral Services for Verda are Thursday October 15, 2020, at 11:30 AM at Brown’s Funeral Service in Durant, Oklahoma. Visitation will be held one hour before services begin. Verda will be laid to rest next to her late husband Ardo at Chippinnock Cemetery in Rock Island, IL. In lieu of flowers please make donations to Faith Lutheran Church in Durant, OK. Services are under the direction of Brown’s Funeral Service, Durant. Online condolences can be made at www.brownsfuneralservice.com https://www.tributeslides.com/tributes/show/LXPQXH6M2ZQWD3XF

Verda Volk, age 96 entered into eternal rest on October 8, 2020. Verda was given life by God, The Creator of all things, and was born March 10, 1924, in Lamesa, TX, a daughter of Henry Larkin Bruce and Alta Mae Stricklen. Verda graduated from... View Obituary & Service Information

The family of Verda Volk created this Life Tributes page to make it easy to share your memories.

Send flowers to the Volk family.