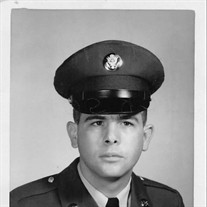 William Dennis “Butch” Jackson passed away on May 30, 2021 in Denison Tx. surrounded by his loving family. He was born 03/31/1943 the son of Rowland and Vesta May (Browder) Jackson. Butch was a proud veteran of the U.S. Army serving during the Vietnam war, He taught in the Silo schools before starting his career in computer programing. He has worked all over the world and loved to travel. Butch worked for N.A.S.A. and also helped with designing parts for Air Force One for the President. When he was traveling, Butch loved to work on his ranch and take care of his cows. In his spare time, Butch also loved to hunt and fish. He was always tinkering with something. It was said that “He was a jack of all trades and mastered them all.” Butch will be dearly missed by his family and friends. He married Anna Judine (Judy) Jackson in 1967 and he loved all 55 years of marriage. This loving relationship produced two sons, Jon Mark Jackson, and Joseph Jay Jackson who he was very proud of. Butch is survived by his loving wife Judy and Son Jon, both of Mead, Ok. A grandson, Josiah Quinn Jackson. A granddaughter, Anya Elizabeth Jackson. Granddaughter, Lydia Colleen Jackson, all of Okmulgee, Ok. Cousin Bill Browder and wife Jimmie of Durant, Ok. Cousin Martha Jo Foster of Wichita Falls, Tx. Cousin Keith Marshall of Howe, Tx. Cousin, Robin Ford and husband Fred of Mead, Ok. And a niece, LaDonna Gordon and husband Calvin of Hot Springs, Ark. Niece, Vicky Litton and husband Richard of San Antonio, Tx. Niece, Peggy Collier and husband Darrell of Tx. Butch was preceded in death by his Son, Joseph Jay Jackson. Mother, Vesta May Browder. Brothers, Pete, David, Mac Murphy. A memorial service to celebrate the life of Butch Jackson will be held on June 12, 2021 at the Browns Funeral Chapel, Durant, Ok. at 2pm. Services are under the direction of Browns Funeral Service. Online Condolences may be sent to the family at [email protected] https://www.tributeslides.com/tributes/show/LQ48CTWY82J9K6JW

The family of William "Butch" Jackson created this Life Tributes page to make it easy to share your memories.

Send flowers to the Jackson family.