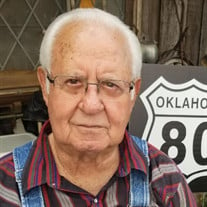 Windell Ray Courtney was born on October 25, 1937 in Atoka, Oklahoma to Eugene Seidle and Margaret Catherine (Silvers) Courtney. Windell passed from this life on May 9, 2020 in Denison, Texas at the age of 82. Windell attended school in Atoka and later married Barbara Jean English on March 26, 1963. They were blessed with 19 years together until Barbara’s passing on October 28, 1982. Windell worked as a contractor in the construction industry and was a heavy equipment operator until his retirement. He was of the Baptist faith and he enjoyed attending vintage car shows, collecting antiques, going to auctions and estate sales, RFCA council meetings and visiting with his “coffee brothers” at the coffee shop. Windell’s love for family and friends will be remembered and treasured forever. Windell was preceded in death by his parents, Eugene and Margaret Courtney; wife, Barbara Jean Courtney and brother, Russell Earl Courtney. Windell is survived by his children, Kenton Ray Courtney of Atoka, OK, Guy Gene Courtney of Ft. Worth, TX and Kimberly Kay Courtney of Hendrix, OK; brothers, Kenneth Courtney of Wichita, KS and Joe Courtney of Atoka, OK; sister, Margadell Courtney of Atoka, OK and numerous extended family and friends. Funeral services will be held at 2:00 PM Friday, May 15, 2020 at Crossway Baptist Church in Sulphur, OK. Pastor Bill Leveridge will officiate. Interment will follow in Oaklawn Cemetery with Larry Hector, Michael Mannon, Christopher Mannon, Jeremiah Rushford, Michael Pierce and Keven Preast serving as pallbearers. The family will receive friends at Crossway Baptist Church on Thursday evening from 6-8 PM. Condolences may be sent to the family at www.brownsfuneralservice.com. A gathering of 50 people with social distancing will be in place for funeral service. Arrangements are under the direction of Brown’s Durant Funeral and Cremation Service.

Windell Ray Courtney was born on October 25, 1937 in Atoka, Oklahoma to Eugene Seidle and Margaret Catherine (Silvers) Courtney. Windell passed from this life on May 9, 2020 in Denison, Texas at the age of 82. Windell attended school in Atoka... View Obituary & Service Information

The family of Windell Ray Courtney created this Life Tributes page to make it easy to share your memories.

Send flowers to the Courtney family.